How Chiropractic Care Has Helped Me: Introducing Jerry Rice 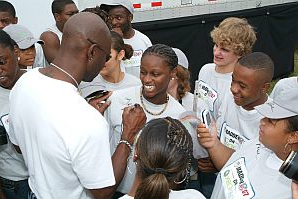 Few people put their bodies through the sort of punishment that football players endure every week-during practice and at game time. Former National Football League (NFL) wide receiver Jerry Rice says that chiropractic care has been instrumental in keeping him in good condition, both on and off the field. He was named the NFL’s Player of the Year in 1987 and retired 20 years later, having broken almost every wide receiver record in the NFL. Named MVP in Super Bowl XXIII, he attributes his athletic longevity to “vigorous exercise and chiropractic adjustments.”

“I believe in chiropractic and I know that it works. You probably know about my long and successful career in football, and I’m flattered by the testimonials to my durability. Football is a very rough and vigorous sport,” Rice says. “I took some vicious hits from players nearly twice my size. Thankfully, I had the durability to withstand these tackles, or I would never have succeeded or lasted as long as I did. Chiropractic was the key to keeping me in the game.” He continued, “My first experience with chiropractic care was right before the 49ers were to play the Bengals in Super Bowl XXIII. A couple of our players were injured and a chiropractor turned things around. I quickly became a believer, and ever since, I have had the benefit of chiropractic care.” He added, “Chiropractic made football great for me. I was at my best and was always at 100 percent.”

Rice had chiropractic adjustments twice a week while he was training to help him recover from the regular assault his body took on the playing field. “If I had everything in alignment, I knew I could play my best football,” he said.  Seeing how it helped Rice, his teammates were soon convinced that chiropractic was better than traditional care involving drugs. “I wanted to set the standard within football,” he said. “I knew if chiropractic helped me put up outstanding numbers, it could help my teammates do the same.”

After his successful football career, Rice then went on to a new physical challenge: learning to dance like a professional. Rice related what taking on this new adventure was like. “‘Dancing With the Stars’ was every bit as exhausting and challenging. Though not nearly as brutal as football, it required many hours of practice I had aches and pains that I’d never had before. Again, chiropractic made the difference, and kept me dancing and in the competition.”

Rice wants to get the word out to as many people as possible regarding the benefits of chiropractic care. He says, “The game of life requires the edge that chiropractic provides. Chiropractic care allows me to lead a very active lifestyle. I have seen its value, both personally and professionally, among my friends and teammates.”